Interview with Tammy L. Gray, author of My Unexpected Hope


Today I get to share an interview with Tammy L. Gray, an author of contemporary romance that I really enjoy reading! Isn't it fun getting to know more about authors? :) First, check out her new book My Unexpected Hope . . . 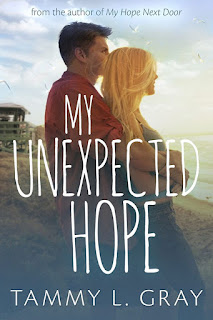 After a year of grieving her divorce and living a life permanently stuck on pause, Laila Richardson is finally ready to have her own happy ending. Then a listing for a quaint cottage in another town answers her prayers for a fresh beginning—one that will bring her closer to her new boyfriend, Ben. Unfortunately, in her small town of Fairfield, Georgia, letting go of the past is virtually impossible. No one wants to see her move on, including the man who destroyed her heart to begin with.

Chad Richardson has spent years in misery but finally has his life on somewhat stable ground. When he learns his ex-wife is dating, he knows it’s time to go back and fight for the life he abandoned. Bolstered by his newfound sobriety, Chad has every intention of winning back the woman he loves, even if that means facing old demons that are waiting for him to fail.

Passions run deep as two souls searching for a second chance find the courage to let go of old patterns. Can they recognize that their dreams are still possible, even when forged from a broken past? 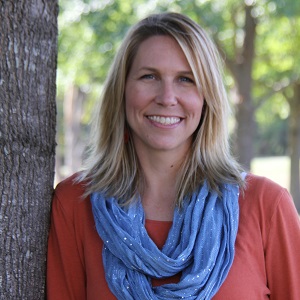 Can you tell us a little about yourself?


I grew up in a military family and traveled around a lot when I was a kid. I went to fourteen different schools and really found my place within the library walls. Books were a great companionship no matter where I lived. I guess that’s why I’ve always loved story so much. When I got older, I put aside my story telling days and became an engineer. I spent 8 ½ years in the Air Force and then another year and a half as a civilian doing pretty much the same job, just out of uniform.


In 2008, my husband went into full time ministry and I decided it was time for me to stay home with my two kids (one on the way) and support his calling. It’s been a beautiful journey as a pastor’s wife. In 2012, I really felt God’s call to write a book about self-esteem and how God loves the imperfect, like myself. I never knew it would turn into a career, but I love how God gave me a ministry and a passion all in one.

What do you do besides writing?


Since I’m a pastor’s wife and full time mommy of three very busy kids, I spend a lot of my non-writing time chauffeuring kids around to school and extra-curricular activities, participating in church events and trying to maintain a somewhat functional home. When I’m not “on duty,” I really do enjoy reading. It’s my go-to activity and often a reward after a long day.

Do you have images you can share that come close to how you picture your characters? Do you like to find visual inspiration for your characters before or during your writing process?


I typically don’t look for images on my characters. I find it stifles me a little. Sometimes after the book is written and I know their individual personalities, I might think of an actor/actress to play them if the book were a movie. But really, I like to let the readers paint their own picture; after all, it’s their world too.


What are some songs that you listened to or inspired you while writing your book?


I was writing My Hope Next Door when Hello by Adele came out. Every time I heard the lyrics, I thought of Chad and Laila, and his homecoming scene on their front porch. I was so eager, I had to force myself to finish the book I was writing before I started this one.


What message would you like readers to ultimately take away from the book?


My Unexpected Hope is a story of second chances and reconciliation. While most of your readers may not suffer from an addiction, I imagine they’ve known someone who has. Or even struggled themselves with something in their life that wasn’t positive. So often, we want to give up, or count ourselves a failure. We wrestle with why we can’t overcome this one thing in our lives, and yet return to it over and over again. It’s for those moments that I wrote this book.


There is a line in the book that says, You can try and fight, and maybe even sometimes succeed, but without faith, you cannot call it freedom. It’s simply bondage on hold.


I wanted to show there was a pathway out of bondage, but I also wanted to be authentic and real, because that journey is not easy. It takes time and work and an incredible amount of prayer.


The beautiful thing, though, is God is the God of reconciliation, so I stayed focused on His promises, and slowly the story began to evolve. And with it, I felt healing and renewal, and I hope my readers will as well.


“For I know the plans I have for you,” declares the Lord, “plans to prosper you and not to harm you, plans to give you hope and a future.” Jeremiah 29:11


What can we look forward to coming from you in the future?


I’m super excited about 2018 when I will launch a brand new series set just outside of Austin, Texas. This series will be a little different from my others because the characters are professionals in their twenties trying find direction and purpose in their life.


There will be at least three books in the series and it focuses on a group of five dysfunctional friends who slowly learn the loving grace of Christ through an outsider.


The inspiration for this series comes from this verse in Matthew 13:


“He also asked, ‘What else is the Kingdom of God like? It is like the yeast a woman used in making bread. Even though she put only a little yeast in three measures of flour, it permeated every part of the dough.’”  Matthew 13: 20-21 NLT


More to come, but I expect the first book to launch in February!


Thank you so much Tammy!

My Unexpected Hope is now available and the digital price is a steal at $3.99 (and FREE for Kindle Unlimited subscribers)! Don't miss it! 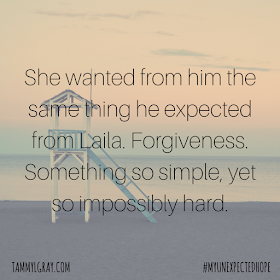